Spy for the Queen of Scots - Theresa Breslin 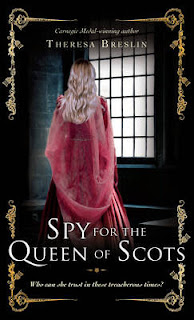 The Spy for the Queen of Scots – Theresa Breslin

Jenny, close friend and companion to Mary, Queen of Scots, has grown up at the French royal court – a place of ruthless ambition, intrigue and deceit. When Jenny overhears a whispered plot and several mysterious deaths take place, she turns spy for Mary.

Then Mary returns to Scotland to claim her throne and the girls face even greater peril. There are many who would slit Mary’s throat to steal her crown, and Jenny must protect her mistress – while also fighting her feelings for charismatic nobleman Duncan Alexander.

Can Mary and Jenny survive this poisonous time of dark secrets, betrayal and murder?


When it comes to historical fiction and me, we don’t always gel, but I always try to give it a go. Even though I didn’t fall in love with Spy for the Queen of Scots, I’m glad I read it.

Right from the get go Spy for the Queen of Scots is highly political, exactly like the time during which Mary lived. Politics is one of those things that I’ve really known about or been that interested in, but with the history and the lovable characters, I was easily able to just go along with it. I think that the political side of the novel confused me so much because there was a huge cast of characters that kept switching sides and I just lost track of them and whether I should trust them or not.

I have to admit that there were some brilliantly horrible characters in Spy for the Queen of Scots that I loved to hate, my favourite being Catherine de’ Medici, the Queen of France. As a member of the infamous Italian Medici’s, as soon as I heard her name, I knew trouble was brewing and it was brilliant. She was everything I expected from a Medici and I’m now intrigued to go back and read Theresa Breslin’s 2006 novel, The Medici Seal.

With the nasty and dangerous characters came the equally as good. Firstly, Mary, Queen of Scots, who I knew very little about bar her execution and involvement in the war between Catholicism and Protestantism. I discovered a brave, strong, dedicated and fascinating woman who had royalty and responsibility thrust upon her from birth. Then you have our protagonist, Lady Ginette, or Jenny, who is Mary’s loyal confidante and friend. There’s literally nothing bad about this girl, although some of her less-smooth moments may have secured her her guy a little sooner, I’m glad those distinctly teenage moments were included.

And now you’re all thinking ‘Her guy? Tell us about him then!’ and so I’ll oblige. Sir Duncan Alexander, a Scots lord, is on the receiving end of Jenny’s love. He’s a very mysterious character and I was constantly unsure whether he could actually be trusted or not, but I was continually hoping that they’d get together. Although the tension was there between them, there wasn’t really enough romance for me, I wanted some swoon, dammit! But all in all, I’m happy with how her story ended, with an exception of the final paragraph of the epilogue. It felt cheesy and contrite and not at all in keeping with the tone of the rest of the novel and I closed the book with a bit of a sour look on my face.

Even though the ending wasn’t quite to my taste, I enjoyed reading Spy for the Queen of Scots and I hope to get around to more of Theresa Breslin’s beautifully researched novels in the future.

For my 2012 YA Historical Fiction Challenge.