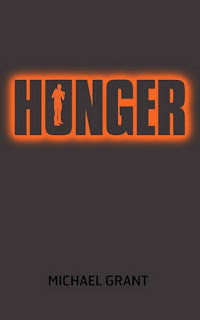 Hunger: A Gone Novel - Michael Grant
Pages: 586
Publisher: Egmont
Release Date: 4th January 2010
Other Books in the Series: Gone (my review)
An uneasy calm has settled over Perdido Beach. But soon fear explodes into desperation as starvation sets in and the mob look to place blame. For the ‘normals’ the buck must stop somewhere - with the ‘freaks’.
More and more kids are developing strange powers and, just as frighteningly, so are the animals in the FAYZ: talking coyotes, swimming bats and deadly worms with razor-sharp teeth are just the beginning.
For Sam Temple the strain of leadership is beginning to show and he’s got more than just dwindling rations and in-fighting to worry about - Caine is back with the psychotic whip hand, Drake, by his side.
And in the background lies the greatest danger of all - and he too needs to be fed.
Hunger is the fantastically intense sequel to Gone. I completely loved it.
I felt really sorry for Sam in the second instalment of this excellent series. The pressure of being Mayor of Perdido Beach , the mutations and powers developing in the FAYZ and the rising troubles between the ‘Freaks’ and the ‘Normals’ really started tog et on top of him. He really seemed so much older than fifteen and I truly felt for him throughout Hunger. Because of all of the things on Sam’s shoulders we didn’t get to see much very much development in Sam and Astrid’s relationship. This is one of my only complaints about the novel.
The only other thing I disliked about Hunger was just a passing comment from Sam, something inconsequential, but something that stayed with me throughout my reading of the novel. Everybody in Perdido Beach is beginning to starve and Mary has become bulimic and has lost a lot of weight. A lot of weight. Sam notices and comments on how good she looks. I know it’s nothing major but it struck a nerve with me and I felt it a little irresponsible of Michael Grant to be portraying that message.
But, regardless, the positives far outweigh the negatives in how I feel about this book. Hunger is written in third-person, with all of the characters having the spotlight. As one of my favourite writing formats, Hunger was sure to be a hit with me. But that wasn’t the only thing that made me love it as much as I did. The constant suspense put me on edge and very often panicking about the situation in Perdido Beach and the safety of the characters.
As well as being full of panic-inducing suspense, Hunger is a terrifying dystopia that made the hair stand up on the back of my neck. The reality of what happens to a group of teens and children where there are no adults or authority figures, when food is running out, powers are emerging in the kids and a potentially fatal divide is falling between the kids of Perdido Beach is incredibly disturbing. Because it could happen in that situation. And it probably would. And that, ladies and gentlemen, is what makes a good dystopia.
I loved Hunger and even though there wasn’t a cliffhanger, I can’t wait to see how Sam’s story continues in Lies.
For my 2010 100+ Reading Challenge
Sophie
Posted by So Many Books, So Little Time at 09:00
Email ThisBlogThis!Share to TwitterShare to FacebookShare to Pinterest