Today I have a wonderful, wonderful post from Sarah Rees Brennan on her Unmade blog tour giving us her best writing tips. Unmade, the final book in the Lynburn Legacy trilogy is out tomorrow (25th September) and it is most excellent. 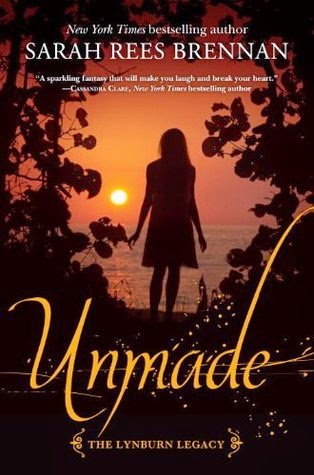 TO THE YOUNG WRITER...

All writing advice may be basically useless.

(I sure wouldn’t like to teach anyone about encouraging openers to posts on writing tips. It is clear I have no gift there.)

Every writer gives the tips that work for the writers they are. But for those listening-they don’t know what kind of writers they are or will become. And the important thing to remember is that the tip-giving writer does not know either.

Nobody gets to decide what kind of writer you are going to be but you.

Stephen King, Nora Roberts and Anthony Trollope all talk about getting up VERY EARLY to write, and doing it every day, as a writing tip. Cool story, Stephen King, bro! Personally, I will not get up early unless forced out of bed at gunpoint. No publisher has as yet been that desperate for me to meet a deadline.

Ernest Hemingway wrote drunk. Charles Dickens wrote at parties, so I think it’s a safe bet he wrote drunk as well. (Edgar Allen Poe wrote a poem at one of those parties about Charles Dickens’ pet raven. Was he sober at that time? The world may never know.) For readers under twenty-one in America and under-whatever-teen in-whichever-elsewhere you happen to be: do not tell outraged parents/teachers/guardians that a writer totally told you to get twisted in order to be a great artiste.

Some writers wrote under the influence of cocaine. (Every day, I come closer to just being straight-up thrown out of YA fiction. But they did!) I am not saying, get drunk. I am definitely not saying, try the cocaine. I’m not even saying, get up early in the morning. If you’re the kind of person who likes that kind of weird thing, with the natural light and the birds tweeting and maybe not even needing caffeine... I mean, I don’t understand it, but more power to you. Chances are you already know when your brain works best. It’s your brain: you’ve had it your whole life.

I think people stress about writing tips so much because we have this idea of writing as something very new that we need to take up, like learning an alien language and trying to find the trick of it, and the context for it.

One writer friend of mine said that she didn’t ever think of herself as starting to tell stories: it was just that everyone else around her stopped telling them - stopped playing games, stopped playing with dolls, stopped whispering tales of ghosts at sleepovers. I think that’s encouraging: that telling stories is part of all of us. All you have to do is decide never to stop.

That’s something to bear in mind. You’re not trying to do anything strange, or impossibly difficult. You’re just trying to find the best way to tell the stories you have to tell.

The worst thing that I see happening to writers is when they get stuck in patterns that don’t work, because this is how they think writing should go. I know someone who makes detailed charts of all their characters’ backstories and future stories and worldbuilding and-she is not writing the actual book. I know someone who always falls down on her endings because she does not plan the books, and does not have the instinct for structure that makes the endings come out okay, or know how to edit the book to put a structure in place later-say by taking out the ideas that seemed like good ideas at the time, but which forced the story out of shape. These are writers who are trying things that don’t work, and they are not giving up.

I give you permission to give up.

If you have been trying to do it one way for longer than a few months, stop. Try it a different way.

Nobody knows better than you. You’re on a voyage of exploration: you’re on quest, and maybe some people you meet while on the quest will be helpful, and maybe they won’t. Keep questing on!

A huge thank you to Sarah and S&S for the post and asking me to take part in the tour.

Now we’ve whet your appetite, flee to your nearest bookshop, gobble up Unspoken and Untold and lie in wait for Unmade to hit the shelves. You won’t regret it, I promise!

Sophie
So Many Books, So Little Time at 06:00
Share